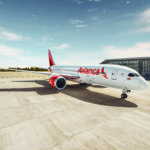 Based in Bogotá Avianca was last week named the best airline in South America by the industry organization skytrax.

The largest Colombian carrier beat all others on the continent for the first regional winner of the 2018 Global Airline Awardsincluding second place Azul Airlines from Brazil, LATAM (third) and Sky Airlines (fourth) from Chile, and Aerolíneas Argentinas (fifth) from Argentina.

Avianca also took first place for having the best economy class in South America, while Star Alliance, which includes Avianca, edged out OneWorld Alliance and SkyTeam Alliance as the best airline alliance in the world.

Copa Airlines, the Panama-based airline that has long operated in Colombia, finished first in the regional ranking for Central America and the Caribbean.

The winners of Skytrax’s World Airline Awards, which have been awarded in each of the past 18 years, were announced July 17 at a ceremony at London’s Langham Hotel. Awards are decided by passenger votes, and more than 20.3 million survey results were used to decide this year’s winners, according to Skytrax.

Globally, for the fourth time, Singapore Airlines won the highest honor as the world’s best airline as well as best first class. “A key factor for customers is consistency, and this has proven to be a real asset for Singapore Airlines, which has achieved excellent results for both its products and services,” said Edward Plaisted of Skytrax.

Other carriers known for their luxury long-haul flights follow closely in the global top 10, including Qatar Airways, Emirates, Cathay Pacific and Lufthansa. Qatar Airways also won the award for the best business class in the world.

Another Asian company, China Southern Airlines, has been recognized as the most improved airline in the world. It now ranks second in the country of some 1.4 billion people behind Hainan Airlines, according to voters.

Best Airlines in the World – Central America and the Caribbean