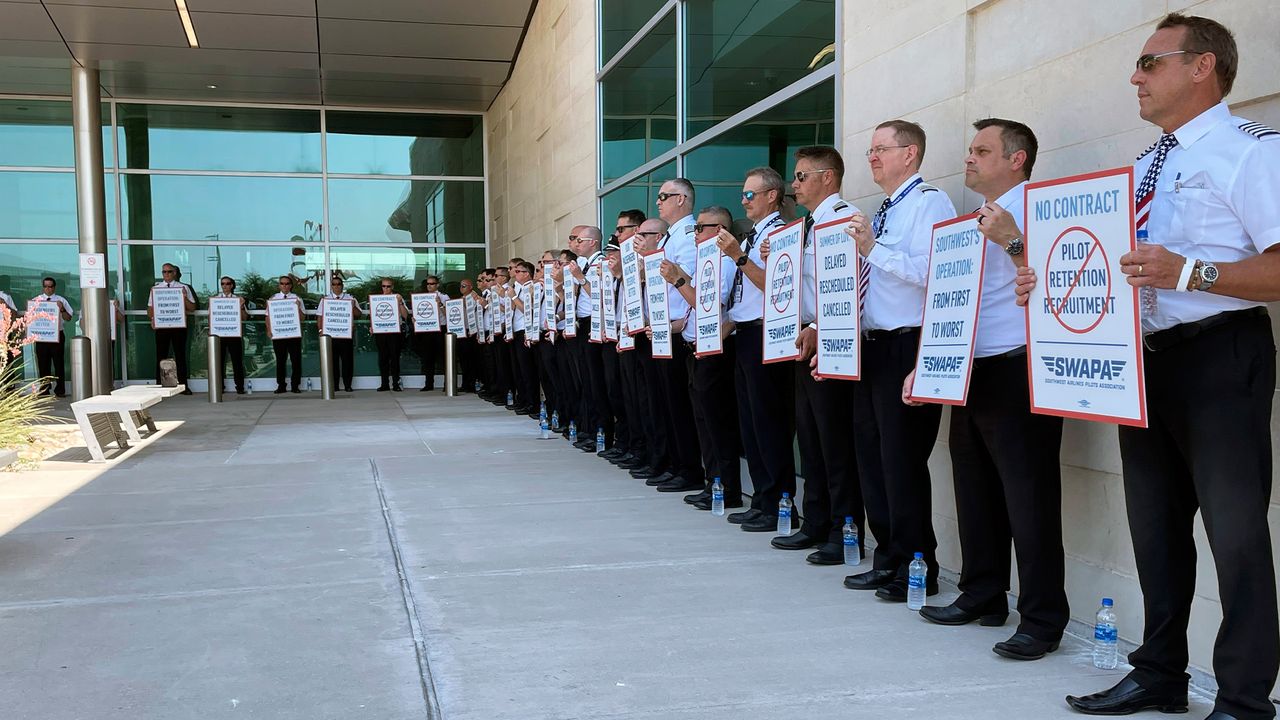 With the onset of the peak summer travel season, the global airline industry is stretched to the point of complete collapse. Understaffed flight crews and airport employees are exhausted; airlines face a shortage of manpower, planes and equipment; and stranded passengers and lost luggage pile up at airports.

More than 4,500 US-related flights were canceled over the Father’s Day weekend and June 16, and analysts expect the July 4 weekend, one of busiest dates for air travel, or worse. The chaos could linger for months, they say, or even years.

Understandably, pilots and flight crews are reluctant to return to work where they are crammed into airports and planes with hundreds of passengers and no measures to stop the spread of COVID-19 in place. Passengers are not even required to wear a mask and workers are routinely forced to work inhumanely long hours, with deadly consequences if they make mistakes due to fatigue.

On Tuesday, more than 1,300 Southwest Airlines pilots marched in Dallas, Texas, to protest fatigue, stress, staff shortages and poor schedules. Delta pilots say they worked more overtime in 2022 than in all of 2018 and 2019 combined, their busiest years yet.

Pilot fatigue is a deadly hazard in air travel. Knowing that they hold the safety of their passengers in their hands, the number of pilots who are absent due to fatigue has reached record highs.

The crisis is due to the criminal and profit-driven response of global airlines and governments to the COVID-19 pandemic. Tens of thousands of airline workers have been sick and weakened by COVID-19, and an unknown number have died. Prior to the start of vaccination mandates for airline workers in the summer of 2021, one United Airlines employee was dying every week.

At a meeting in Doha, Qatar on Monday, airline executives denounced workers for refusing to risk their lives. “People have gotten into the bad habit of working from home” during the pandemic, Akbar Al Baker, the head of host airline Qatar Airways, told reporters. “They feel they don’t need to go into an industry that really needs people on the ground,” he said, adding that staffing shortages at airports could “harm growth “, according to Reuters.

With a large number of pilots in the United States set to retire in the coming years, industry lobbyists are now pushing to raise the retirement age from 65 to 67. Incredibly, they are calling for the repeal of the federal requirement that new pilots have 1,500 hours of flight time before qualifying as airline pilots and flying as co-pilots. There has been a 99.8% reduction in airline fatalities since the requirement was dropped from 250 hours in 2013.

These conditions are causing movement of pilots, cabin crew and other airline employees across Europe, the United States and the world.

When the pandemic first hit, US airline executives lobbied and received some $63 billion in federal stimulus funds, ostensibly to avoid layoffs when air travel collapsed. Instead, they quickly forced out 80,000 workers through “voluntary buyouts” and early retirements. After receiving their own government bailouts, Lufthansa, KLM and other European and international carriers followed suit.

According to a study by the consulting firm Oxford Economics, quoted by the FinancialTimes last week, compared to pre-COVID levels, there were 2.3 million fewer jobs in the aviation industry in September 2021.” FinancialTimes wrote.

With government bailout money in hand, airline executives pushed aggressively to lift travel restrictions and all measures to protect workers and passengers, which they saw as going against their profit interests.

On December 21, 2021, Delta Airlines CEO Ed Bastian wrote to the Centers for Disease Control and Prevention saying that a reduction in the quarantine period for infected workers “would have a significant impact on our workforce. and our operations”. Less than a week later, Biden’s CDC director Rochelle Walensky reduced the quarantine period from 10 days to 5, forcing sick workers back to work.

In April 2022, Nicholas Calio, president of Airlines for America, America’s largest airline lobbying association, wrote a letter to federal officials urging the government to lift mask mandates for all air travelers and end to the COVID-19 testing requirement for international travel. , stating, “There are currently no restrictions supported by data and science in today’s public health environment.”

In May, the Biden administration authorized an end to mask mandates on trains and planes. Then, on June 10, the CDC dropped testing requirements for air travelers entering the United States.

The Biden administration has adopted a “let it rip” policy even as new subvariants of the deadly and debilitating virus spread across the country.

Airline workers, like British railway workers and other sections of the working class, say, “Enough!” This growing opposition, however, needs organization and a political strategy.

The nationalist and pro-capitalist policies of the unions, which pit workers against each other in a fratricidal race to the bottom, have led airline workers into a dead end. New grassroots-controlled organizations are needed to coordinate their struggles across national borders against these global corporations. This is why the International Workers Alliance of Rank-and-File Committees (IWA-RFC) was founded last year.

An industrial counter-offensive by the working class must be combined with a conscious political struggle against capitalism.

The crisis in the airline industry is the product of decades of “free market” promotion by capitalist governments around the world. The deregulation of the airline industry in the United States and Reagan’s 1981 crushing of the PATCO air traffic controllers’ strike were the first shots in a war against airline workers. This was followed by the privatization of state-owned airlines in one country after another, a wave of bankruptcies, mergers and mass layoffs, and the emergence of “low budget airlines” which spurred fierce competition and undermined safety and working conditions.

The crisis and failure of capitalism is now apparent for all to see: in record soaring inflation, commodity shortages, the ongoing pandemic, and the waste of society’s resources in enriching the economy. corporate and financial oligarchy and their mad plans for World War III. The global airline industry must be transformed into a public utility, democratically controlled and collectively owned by the working class, as part of the socialist reorganization of the global economy.