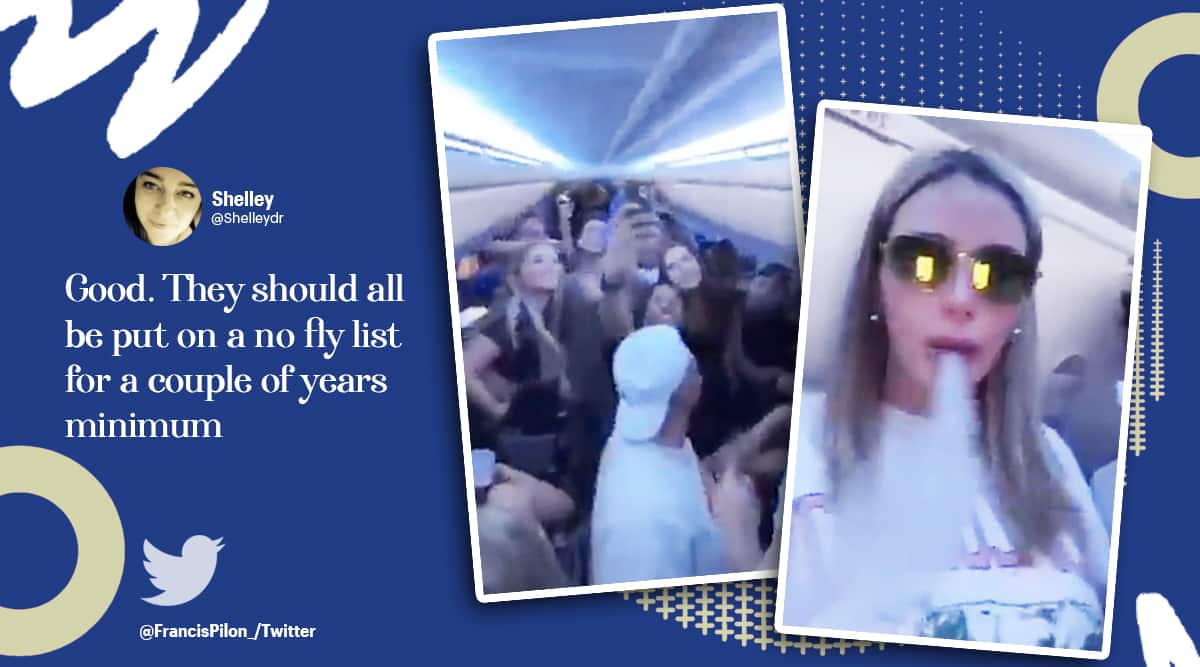 Amid rising cases of coronavirus infection across the globe, a video of influencers hosting a party inside a Canadian airline has gone viral, drawing criticism from all walks of life, including Prime Minister Justin Trudeau.

Videos posted inside the plane – heading to Mexico for the New Year holiday – on social media by reality TV stars and influencers show them partying and drinking alcohol, vaping in the driveway.

According to Montreal Journal, involved people from the reality shows Occupation Double and Love Island and was chartered by James William Awad.

As a reminder, this video during the party where we will see her smoking in full flight: pic.twitter.com/tuX8NnKUdA

As the video went viral, Transport Minister Omar Alghabra as well as the Ministers of Health and Public Safety said in a statement on Tuesday that officials from their departments would immediately open an investigation into the incident.

Citing ‘unacceptable behavior and instances of non-compliance with mask wearing and other aviation safety requirements’, they reiterated that the ‘health and safety’ of flight crew and passengers is a ‘top priority’ .

Prime Minister Trudeau also slammed the group for their brazen celebration, saying it was a “slap in the face” to Canadians who have followed the rules since the pandemic began. Trudeau said Wednesday he was “extremely frustrated” watching the now-deleted social media videos of Quebec influencers.

“We know how hard people have worked to protect themselves, to limit family gatherings over Christmas, to wear masks, to get vaccinated, to do all the right things. It’s a slap in the face to see people putting themselves at risk, putting their fellow citizens, putting airline workers at risk by being completely irresponsible,” Trudeau said speaking to reporters.

After the incident, flight attendants also demanded stricter measures from the government and carriers to ensure onboard health and safety amid the Omicron surge, World News reported.

Sunwing Airlines canceled the influencer group’s return flight scheduled for January 5 after they “would not agree to the airline’s terms and conditions.” Since then, other airlines like Air Canada and Air Transat have also denied them a return flight.

2/2 We confirm that they will be denied boarding based on our legal and regulatory obligations to ensure the safety of our passengers and crew, which is our top priority.

As airlines refused to bring them back to Canada, the public supported the move and criticized the group for its negligence.

Surprisingly, the maskless part isn’t even my biggest concern. COVID or not, I wouldn’t want a bunch of people standing around and celebrating on my flight. It’s not a private jet for God’s sake…

Good. They should all be put on a no-fly list for at least a few years

Just because you’re chartering a private plane doesn’t mean you can do anything while the plane is in the air. the airspace and the safety of all on board are priorities. These influencers thought money would allow them to do anything. Worse still, they recorded it and made it public.. 🤦‍♂️

Well, they influenced me. I added Air Transat, Sunwing and Air Canada to my favorite airlines list.

Charter or not, open booze and vaping are still illegal, luckily I don’t have to deal with these people when I’m working, my cockpit door will be locked after what they’ve done. Feeling bad for cabin crew, there’s not much they can do

This is disgusting and selfish behavior. Why didn’t the captain divert to the nearest airport?

Considering the Covid risks for a moment, the airline’s flight should be investigated for lack of onboard screening/safety.
Vape and treat it like a club in the sky, I bet if they crash and survive they’ll sue the airline🤦‍♂️

At least wait until you get off that fucking plane

If you’ve ever wondered why so many Mexicans hate Canadian tourists, it’s because they’ve adopted what were once uniquely American behaviors.

It only gets worse once the plane lands in Cancun. #raw

However, after much hassle, a dozen passengers managed to arrive in Montreal from Mexico. According to CTV Montreal News“at least one of the passengers on an Air Canada flight on Wednesday evening was handcuffed by border agents shortly after arriving at Montreal-Trudeau airport”, while others refused to answer questions from reporters .

Net worth of Rs 1300 cr of Ram Charan includes an airline and a polo club?