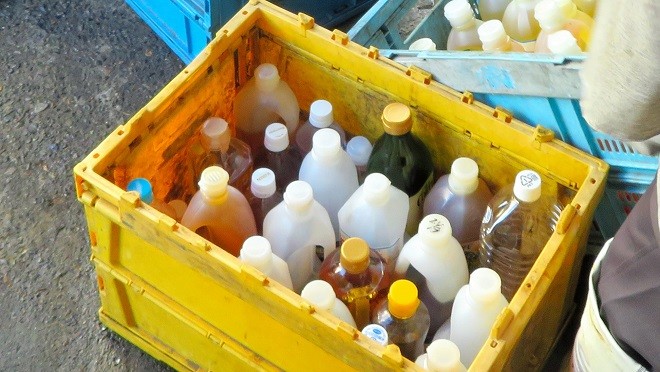 The thieves prowling the streets of Tokyo’s Ginza and Shinjuku entertainment districts at night aren’t so interested in luxury goods these days as they are targeting leftover scraps from the making of tempura pork chops and ” tonkatsu”.

Restaurants leave 18-litre cans of used cooking oil outside their windows when they close for the night so recycling dealers can drop by later to pick them up. More and more often, however, cans are missing when these dealers make their rounds.

And criminals aren’t the only ones seeking out this now coveted product, once thought to be a disposable by-product of the kitchen.

“We used to charge a fee to dispose of used cooking oil as industrial waste,” said a Tokyo-based recycling officer. “The price of oil has since jumped, so now we have to pay to get it back. And so many people have entered the market.

The price suddenly started to rise around the spring of last year as exports increased. Cooking oil is derived from plants and is reused when burned as fuel, so it is considered a good source of renewable energy.

And used cooking oil can be used as a feedstock to make aviation jet fuel, an attractive product for an industry that has come under scrutiny for emitting large volumes of carbon dioxide.

Demand is strong in Europe. But Japan exports most of its waste oil to Singapore, which is home to a factory that produces “sustainable aviation fuel”. Trade statistics show that export volumes to the city-state have risen steadily since 2018 to reach 42,000 tonnes in 2021. That’s 2.3 times what it was just three years earlier.

Waste oil exports to Singapore also increased in price from 68 yen (50 cents) per kilogram to 97 yen per kg over the same period. It averaged 159 yen per kg in the first six months of this year.

Officials from UCO Japan, which organizes and coordinates used cooking oil collectors and recycling agents, said some 400,000 tons of used cooking oil are collected annually from food factories, restaurants, convenience stores and other establishments across Japan.

Similarly, the selling price of used cooking oil more than doubled year-on-year to 49.5 yen per kg in fiscal 2022 in Sagamihara, Kanagawa Prefecture.

The city government collects similar oil there from households as a form of recyclable waste and receives more and more requests to purchase used cooking oil from general households. But the quality of the oil varies more than the oil used in food factories or for cooking school lunches.

The price spike is also causing supply problems for other similar oils used by domestic industries.

The volume of supply used to make livestock feed – which makes up the bulk of domestic demand for used cooking oil – remains largely unchanged at 200,000 tonnes a year, while soap, paint and d ‘Other oil-based products get the short end of the stick,’ officials said.

The Marusho company, based in the Adachi district of Tokyo, has been collecting used cooking oil from local governments, food factories, restaurants and other sources in the Tokyo metropolitan area for about 50 years. He shipped the oil primarily for use as a raw material for printing ink.

Demand is growing for similar oils, but all the company can do at this time is continue to supply regular customers, Marusho officials said.

The rising price of cooking oil has led to a trend to reduce its use, which also has an impact on it, the officials added.

“We have received proposals to reuse some of our oil for export,” Marusho Chairman Mitsuyoshi Fukano said. “But our top priority is to continue to supply customers who have purchased from us in the past.”

Since 2006, the northern city authorities have been collecting used oil from households through 370 collection points. They each have a bin to collect used cooking oil installed next to recycling bins to recover cardboard boxes and plastic bottles.

The bins are filled with plastic drink bottles, salad oil containers and other types of bottles containing oils in different shades of brown. The Sapporo city government collects about 240,000 liters of waste oil each year, the most of any city in Japan, officials said.

About 500 to 600 visitors deliver some 300 to 400 liters of used cooking oil each month to a typical supermarket collection depot, said Shinichi Maeda, president of Oil Recycle, a company that collects used cooking oil in about 300 recovery points.

Supermarkets are jumping at the chance to welcome used oil collection boxes, as “those who leave used cooking oil in a recycling box in a supermarket also end up shopping there,” added Maeda.

Hoping that demand will continue to grow, UCO Japan officials are trying to exploit the country’s rich “urban oil fields”. The company has set up an “underutilized resource recovery” project to collect similar used oils from households. UCO estimates that the houses produce about 100,000 tons per year.